The last time we had such an alignment that creates an astonishingly bright “star” was 3 and 2 B.C. Right before the birth of Christ and very likely to be the star that the Magi followed while looking for baby Jesus.

THIS IS ABSOLUTELY AMAZING!  PAY ATTENTION!

Signs of the Times.  Signs in the Heavens

Important turning points are marked out through signs on the celestial bodies through eclipses, stars, comets and planetary alignments.  We have recently undergone a series of blood red moons.

I would theorize that today’s star has potential significance for the following:

June 30th Star of Bethlehem moment:  Jupiter and Venus 1/3 of a degree apart.  They will remain no greater than 2 degrees apart – a thumb’s width at arm’s length – until July 4.

“…Sky & Telescope Contributing Editor Fred Schaaf points out that this current string of Venus-Jupiter conjunctions closely resembles a similar series between the years 3 and 2 B.C. It has been suggested that their joint appearance came to be known as the Star of Bethlehem.” 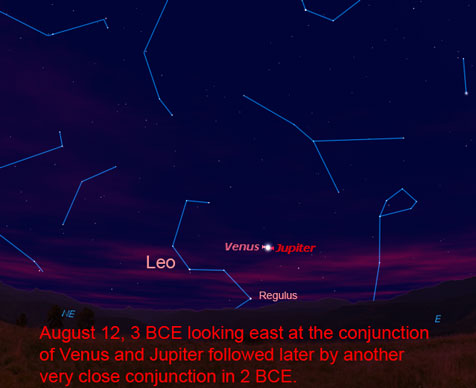 Image from Astronomy notes with additional discussion of the start of Bethlehem theory from an astronomers point of view.

As a reminder or introduction to the concept:   you should use the possibility of the end of times, the fear and excitement that goes along with it as energy to break past your personal fears and roadblocks holding you back from God and get right with God your Maker.  Use the energy derived from these emotions to pursue God your Maker frantically.

God wants you to pursue Him and show Him that you really care about Him and you really want A good relationship with Him.   How do you do this?  Pray directly with the utmost sincerity and serious directly to Him and ask Him for help.  Tell Him you want to get right with Him and get into Heaven. Ask Him to show you Jesus and show you that Jesus is real.  Ask him what you need to do next to get into Heaven.     Start from here and let God guide you personally to the answers.  This way you can breakthrough all of the insane levels of confusion that is out there floating around in the world today.    This is how I did it in a most genuine, sincere way back in 1996 after reading through the entire Bible.

And remember, this is your life and eternal life you’re dealing with – no one is going to get you into heaven for you.  You are responsible for every action and word from your life.  So just get it done.  Get right with God.  If you’re sincere He’ll grant you the ability to believe in Jesus, because you can’t believe in Jesus on your own, through your “flesh” (many don’t seem to understand that).  So cry out to God.  Then He can enable you to believe in Jesus.