As I sat editing my latest book, I was working on a chapter that the Lord began to highlight as pertaining to the present world situation with the American elections and the Great Reset—and how it relates to satan’s agenda at Babel. In it I list 3 diabolical intentions made clear in this account: 1) his intention to establish for himself a city, 2) to build a communications tower connected in spirit to the heavens, 3) and to make a name for himself in the earth.

The enemy worked in collusion with a people who were unified in their intention to have dominion on Earth. The people were unified through their communion with the ruling dark forces that came in with the fall of man. The enemy knew that incredible power would be amplified and unleashed through their union of purpose, as God said in Genesis 11:6, “…The people are united, and they all speak the same language. After this, nothing they set out to do will be impossible for them!”

In the book of Daniel, chapter 7:25, satan is described as one speaking great words and attempting to change times and laws. At Babel he devised through a demonic overreach to change times and laws outside of God’s timing. However, time belongs to God alone and nothing happens outside of His timing—satan found this out at Babel and is now about to find this out once again! At Babel, the Scriptures tell us that God came down, destroyed the enemy’s plan, confused their communication and scattered everyone! 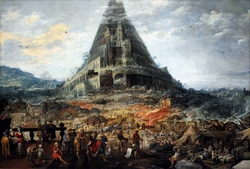 “But the LORD came down to see the city and the tower which the sons of men had built. And the LORD said, ‘Indeed the people are one [unified] and they all have one language [communication]…now nothing that they propose to do will be withheld from them. Come, let Us go down and there confuse their language, that they may not understand one another’s speech.'” (Genesis 4:5-7, emphasis added) (Photo via Wikimedia Commons)

“I Am Coming Down with Fire and Rain!”

Satan is again devising a plan to establish his kingdom—his world empire—and is attempting to come out to take his place openly in the world. According to Scripture, the time will come when God does allow the world to move toward a new world order, a world government ruled for a brief time by satan. This is not that time!

The Lord then took me to the account in Exodus chapter 3, where the enemy had oppressed His people for four hundred years in Egypt. It says He heard their cries and said to Moses: “…I have come down to deliver them out of the hand of the Egyptians, and to bring them up from that land to a good and large land, to a land flowing with milk and honey…” (Exodus 3:8).

In regard to the present situation in the United States and the world plot through the Great Reset, prayers and intercession have been going up and filling up the bowls before the throne of God. In response God is now saying, “I am coming down!” God’s fire is about to fall. Sometimes it feels like it takes a long time for God to move but when He moves, the fire falls—accompanied by thunderings, lightnings and earthquakes (Revelation 8:5).

Recently I awakened to these words: “I hear the sound of the abundance of rain.” As I pressed into the Lord, I heard Him say, “I am coming down with fire and with rain.” The Lord then reminded me of Elijah at Mt. Carmel. Elijah had told the people that the God who answers by fire is God! No matter how hard they tried, Jezebel’s prophets could not produce fire. Elijah then soaked the sacrifice with water from 4 large jars, and he did this 3 times, representing cleansing, purity and intercession. Then the Lord came down on the sacrifice with fire and licked up the water.

The Lord then told me, “Jezebel desires a seat in the White House, in the Senate, in the House of Representatives, in the Mainstream Media and on the heads of world finance. She has her prophets of Baal in all spheres, but they are powerless against Me; I am coming down to scatter them and their evil plotting.”

God Is Waiting to Hear Our Roar! Don’t Give in to Fear

We have entered the decade of the mouth where God is waiting to hear our roar, but His people and much of the world have been afraid to speak and afraid to act. Jezebel’s most powerful weapon, which is now being utilized, is fear and intimidation; a weapon she also used against Elijah, causing him to run. We see her tactics of intimidation now being employed in all spheres. The enemy has been overpowering and wearing down the saints, but hope is still alive!

The people of God cannot afford to succumb to fear right now, the stakes are too high. We must make our stand on the Word of God, and the word of His prophets, bowing down, praying and interceding as Elijah did. God is faithful to His Word, His promises are sure; He will back the words of His anointed prophets.

“…’LORD God of Abraham, Isaac, and Israel, let it be known this day that You are God in Israel and I am Your servant, and that I have done all these things at Your word. Hear me, O LORD, hear me, that this people may know that You are the LORD God, and that You have turned their hearts back to You again.’

“Then the fire of the LORD fell and consumed the burnt sacrifice, and the wood and the stones and the dust, and it licked up the water that was in the trench.” (1 Kings 18:36-38) (Photo via Pixabay)

There Is Still Time

“…’How long will you falter between two opinions? If the LORD is God, follow Him; but if Baal, follow him.’ But the people answered him not a word.” (1 Kings 18:21)

As He did at Babel, with Moses in Egypt, and with Elijah at Carmel, God is coming down! Jezebel will be thrown down!

Angels, Eagles and an Army of Esthers

I saw a large contingent of angels being sent out; they were pale gold in color—which I believe represents purity! The Lord said these angels were being sent to uncover hidden plots; they were highly skilled in exposing deeply hidden things.

I then saw a large convocation of eagles coming to the rescue armed with the Word of God. Their words were like Holy Ghost artillery having the power to blow up Jezebel’s strongholds. These are the voices of His prophets carrying His word that will not return void. Many of these prophetic voices are women, a righteous army of women empowered by the Spirit of God to counteract Jezebel’s work, and they are now being released in the battle.

They represent a righteous move of God among women who, like Esther, have the King’s ear and have been raised up for such a time as this. In partnership with their Mordecai counterparts, they will write and utter decrees to annihilate the enemy and hang the Hamans on their own gallows.

God is about to move, and it will come with thunderings and lightnings. He is coming with fire and He is coming with rain to destroy the enemy’s untimely agenda. We may be in for a period of volatility and uncertainty and should be prepared spiritually to stand and not be shaken. God is saying to us, “Do not fear the fire, you will not be burned; do not fear the rain, it will not flow over you. Stand with Me in the fire and in the rain and you will see marvelous things. Don’t stop believing and don’t stop praying; I am coming down! Prepare for the supernatural displays of My might, gird up your loins and be ready!”

“Then Elijah said to Ahab, ‘Go up, eat and drink; for there is the sound of abundance of rain’… Then the hand of the LORD came upon Elijah; and he girded up his loins and ran ahead of Ahab to the entrance of Jezreel.” (1 Kings 18:41, 46)

Faith Marie Baczko is the president of Headstone International Ministries and HWAM – Headstone Women’s Apostolic Network. Faith is an apostolic, prophetic teacher and author, bringing significant revelation to mobilize, equip and strengthen the Body of Christ for this momentous hour of history. She carries key insights into the profound significance of Israel’s place in the purposes of God for the time of the summing up of all things in Christ. She models a life that inspires others to live undistracted and rigorously devoted to passionately pursuing Christ. Faith is an international speaker, and through her ministry and work in South America, she has garnered enduring relationships with pastors and leaders, united in passion for truth that is the foundation of revival. Her books are also available in Spanish.

PLEASE FORWARD to all your friends! Permission granted (and you are also encouraged) to reprint these articles in hard copy form, as well as sending them to your own email lists and posting them on your own websites. We ask only that you keep Elijah List website, email contact info, and author contact information intact.