Now this would be an incredible development in which would certainly shocked the world. It’s sad watching this guy George Soros talk including in his various interviews especially that 60-minute interview.   He has certainly experienced some hard brutal things in his life from a young age.  What a wonderful thing it would be for George to break down and cry being filled with the love of Christ and the light of God while addressing the world and confessing Jesus is Lord.  That would be absolutely mind-blowing awesome.

Maybe Warren Buffett will follow  as some reports have him associated with all sorts of vastly bad things.  He did allocate all his fortune to the Satanic Bill Gates foundation while stiffing his kids and grand kids according to a report heard back when. Of course you want to do your own research.  I would like to see Warren make a turn around too and confess Jesus is Lord too.

Yes these two were childhood heroes of mine.  Their financial investing & trading ability was preached to me for a long time.  I bet to many of you too.

May there be MANY Paul like conversions out there to make hearts melt and hearts turn to fall in love with God in Christ Jesus.

This is amazing revelation. I was led by the Holy Spirit to look up Luke 7:14 as another “7/14” of significance. It is the story of the widow of Nain whose only son has died. Jesus sees her weeping and is moved with compassion:

“Then He walked over to the coffin and touched it, and the bearers stopped. ‘Young man,’ He said, ‘I tell you, get up!'”

The young man arose and began to talk and it says that Jesus “gave him back to his mother” (verse 15). What I found shockingly fascinating is that I was pointedly led by the Holy Spirit to look up the word “coffin,” as that is what Jesus touched. He didn’t touch the boy, He touched the coffin. I was stunned to discover that the Greek word for “coffin” used here in Luke 7:14 is SOROS. The passage suddenly took a whole expanded meaning.

The word Nain means “beauty” and comes from a Hebrew root word meaning “green pastures.” That root word was used in Psalm 23:2 when David said, “He makes me to lie down in GREEN PASTURES.” (For those who have read my just-released vision of Professor Waymaker and the promotion to GREEN PASTURES—I did not find this additional connection to “green pastures” until afterwards.)

Jesus Is Touching the Coffin

The widow of Nain, weeping at the loss of her only son, represents the earth itself in mourning at the loss of the potential and destiny of the nations. Matters in 2020 have pushed the nations right to the precipice, and we were so far gone that the pall bearers were already carrying us away. Jesus has showed up in a Passover rescue operation and He is “touching” the coffin and stopping the death procession. The “bearers” of death must stop. 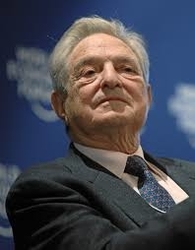 If you didn’t know, Soros has been perhaps THE major funder of a death agenda around the world. He has been a one-man wrecking crew of the destiny of nations with what he has financed and promoted. He and his “Open Societies” have been working a depopulation agenda (death by many forms). Of course, Soros is not the devil nor is he alone in what he does—but his yieldedness to satan has been at the highest level for a long time. On July 14, he begins to be addressed at the next level as his procession runs into Jesus. Maybe Soros himself could have a Paul-on-his-way-to-Damascus encounter with the Lord. (Photo via Wikimedia Commons)”